That’s a pretty impressive title. Our film tells two stories, the first, and by far most interesting, is the personal tragedy of Greg Taylor and his family; the second, no less important, but way more dull, is the story of criminal justice reform that finally, after seventeen years, granted Greg his freedom.

It is inauguration day in a country that, it is said, is firmly divided. Two camps are firmly entrenched in their positions and are unwilling to compromise. Eight years ago when President Obama was sworn in Mitch McConnell vowed to oppose everything Obama wanted to do. Today, I’m sure the Democrats feel the same way. 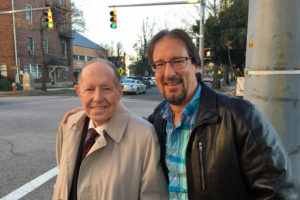 The state of criminal justice reform wasn’t all that different back in 2003 when Supreme Court Chief Justice I. Beverly Lake, Jr., a staunch law and order advocate, and Chris Mumma, his law clerk, talked about a number of wrongful conviction cases that had been in the news in North Carolina. The cases, Ronald Cotton, Darryl Hunt, and Terence Garner, bothered Justice Lake. Together he and Chris began to work to improve the system.

The political environment was unique. Lake was the first Republican Supreme Court Chief Justice in North Carolina in 100 years. The Governor, Mike Easley, was a Democrat and a former prosecutor, and there was a democratically led, and functioning (meaning the majority and minority parties would talk to each other), legislature.

It took a man like Justice Lake, willing to listen to the other side and acknowledge that there was some truth to their position, someone who was willing to take the first step, for criminal justice reform to happen. But happen it did.

North Carolina is a better state for it.