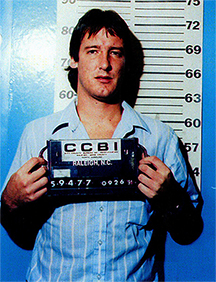 When we first decided to tell Greg’s story we were focused on two things, Chris Mumma and the North Carolina Innocence Inquiry Commission. Chris, because she is a dynamic woman who has done so much to help improve the criminal justice system in North Carolina; and the NCIIC, because it seemed (and seems) like an innovation needed in every state in the union. But that’s a story for another post.

Now that we’ve sat with this Greg’s story for a while, we see that it’s much more powerful than simply spreading the word about the innovative NCIIC. Greg’s case includes five of the six reasons for wrongful convictions.

• Bad lawyering – Greg’s attorney decided that the prosecution’s case was so weak that he didn’t need to mount a defense because no jury would convict Greg. And they did.

• Snitches – Two jailhouse snitches testified against Greg. Both received favorable treatment from the prosecutor’s office for their testimony.

• Eyewitness identification – one witness testified she had seen Greg and Johnny with the victim on the night of the murder. She got her identification of Greg & Johnny right but misidentified the woman they were with.

• Government misconduct – The NC State Bureau of Investigation did an analysis on a spot of blood that was found on Greg’s truck. Their testing determined that the substance was not blood. However, because of SBI policy, the wording on the report was pre-determined. It was to read: [the substance] “gave chemical indications for the presence of blood” even though the SBI knew it wasn’t human blood. The prosecutor in the case referenced the blood 17 times in his closing argument.

• Junk science – analysis of the crime scene, like the entire investigation, was done with the intention of proving Greg and Johnny’s guilt. The investigators testified that the murder had taken place in the cul-de-sac where Jacquetta’s body was found because Greg’s truck was stuck in the mud 100 yards away from the body. Re-analysis indicated that her body had been moved. Investigators also testified that Greg and Johnny wouldn’t absolutely have to have blood on them after they had beaten Jacquetta to death, a claim that still seems ludicrous.

We are committed to telling Greg’s story. It contains so many lessons that we, potential jurors, need to know about our justice system. They are important lessons that show exactly why criminal justice reform is needed across the country.